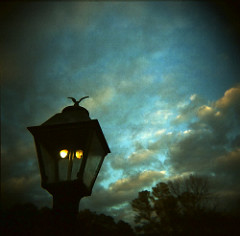 The collection including the first Elsewhere comic and it’s sequel promise great things from a Victorian Era Bruce Wayne. While both do an adequate job in capturing the Gothic feel associated with the time period, it comes up just short of a truly amazing product.

Perhaps I am biased. Perhaps reading League of Extraordinary Gentlemen only a month ago set the standards too high. But I never felt either story grab me and hold on tight like other groundbreaking Batman tales such as The Dark Knight Returns and The Killing Joke. It is unfair of me to compare it to these iconic tales, yet these were the first two (and only) other Batman comics I have read at this point. By comparison, these fall flat.

Let’s break them down into two separate stories. The original Gotham by Gaslight tells the story of Batman going up against Jack the Ripper. While writer Brian Augustyn has a fascinating take on the identity of the legendary villain, he doesn’t live up to the standards of Batman’s own legendary antagonists. It is a tale of betrayal and violence that fits well in the Batman universe, but is sadly predictable and lacks a captivating resolution.

At various points in the story we are given red herrings and callbacks to other Batman stories, but none of them go anywhere, much to my disappointment. I may seem overly harsh, but it is not a bad story, per se. It is just not what I was looking for in a Batman story, particularly one that has the promise of steampunk marvels. It was too tame, too ordinary, too simple. I recognize that there is only so much that Augustyn could tell in the short comic he was writing, but nevertheless, I felt a little cheated that more traditional Batman characters weren’t included.

That feeling carried over into the sequel. The main villain here is flamboyant, cocky, and typifies many Batman villains over the years. But he is still a new villain, and again, none of Batman’s traditional foes make an appearance. Side characters like Julie Madison and Commissioner Gordon appear, but our only antagonist (with any real substance, anyway) is the new Alexandre Leroi.

In this story, Augustyn includes includes a true steampunk style with Leroi’s airship flying over Gotham in the finale. Such potential. Leroi has a hidden partner that I was begging to be The Joker, The Penguin, any of Batman’s classic foes. But again, they fall flat. Even Buffalo Bill Cody makes an appearance, which goes nowhere. The conclusion is action-packed and exciting, but then the secret plot revealed at the end seems tacked on and counter-intuitive. The seeds are set throughout the comic, but the partnership between Leroi and his associate seems forced. at least the way I read it, Leroi does not seem to be the kind of person to acquiesce to such a petty plan.

Half the work of a graphic novel is done with artwork, and I would be remiss not to mention the work of artist Mike Mignola and inker P. Craig Russell. Their artwork was engaging and detailed, especially for Alexandre Leroi’s swashbuckler costume, which was everything we want from an airship pirate captain. The coloring was nicely muted for the classic Victorian look, and the images were engaging. I only wish the story was as intricate.

I am probably being too harsh on what is considered by some as one of the great Batman graphic novels. It is not by any means a horrible comic, and is worth a read if you are into that sort of thing. But it is not what I look for in a Batman comic, and doesn’t quite live up to my expectations for Gothic or steampunk fiction either. If Augustyn had more pages to fill with a more complex story arc, perhaps I would have enjoyed it more.

As it is, I think it is a decent enough read if you want a quick Batman story that is a bit different than normal. But I would recommend reading it at the library before dropping almost 15 dollars on the graphic novel at your local comic book store. Here’s hoping the upcoming movie version makes the story more engaging.