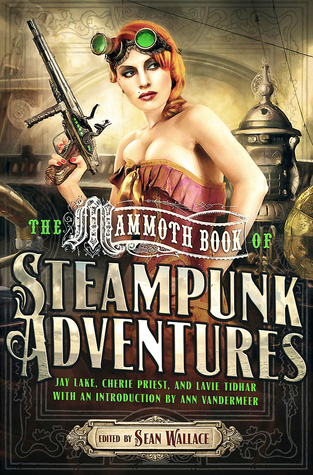 Short story anthologies vary widely based on content. The popular journals often have very artistic, highbrow tales that I personally find rather dry. I attempted to read some stories out of an edition of Glimmer Train I picked up at a book sale. I did not make it far.

As a fan of genre fiction, I should have known to start elsewhere. The collection assembled by Sean Wallace in The Mammoth Book of Steampunk Adventures blew me away. Every story was engaging, thoughtful, and beautifully told. Some were far more steampunk than others. The first story by Tobias S. Buckell–“Love Comes to the Abyssal City”– is the epitome of everything one would expect in a steampunk story: exotic steam machines, Victorian era technologies, cities of metal. Then there is Alex Dally MacFarlane’s “Selin That Has Grown in the Desert”, which takes place in a village of yurts in outer Mongolia. The solo traditional “steampunk” element are tiny steam-powered machines that offer a secondary conflict.

The settings of all these tales are extraordinary, and easily draw in the reader. But even more remarkable than the steampunk background are the depth and social consciousness of these particular tales. Some spoilers may abound, but I will reference some of my favorite elements.

Primarily, my fascination with this anthology was how empowering it is to read as a woman. In Tanglefoot, we see a witch that is locked in an insane asylum, but is the only person that can stop the demonic automaton. In “Five Hundred and Ninety-Nine” by Benjanun Sriduangkaew, “The Return of Chérie” by Nisi Shawl, and the above mentioned “Selin” we see lesbian relationships at the forefront of the conflict. We see stories like “Memories in Bronze, Feathers, and Blood” by Aliette de Bodard and Sriduangkaew’s story deal with the problems of war. The ethics of genetic engineering are explored in “Anna in the Moonlight” by Jonathan Wood and “Green-eyed Monsters in the Valley of Sky, An Opera” by E. Catherine Tobler.

One of my personal favorites, due largely to the imaginative world it suggests, is “Beside Calais” by Samantha Henderson. She paints a world where airplanes are living creatures, tamed for war by humanity.

One of the greatest benefits of the steampunk genre is that it allows us to explore ethical conundrums in a world that engages the imagination to its fullest. Each story within this anthology asks ethical questions, but not all of them give answers. In a world where automata seek freedom from their human masters, are they justified in slaughtering thousands for that freedom? Where exactly is the line between human and machine when both are able to feel pain and empathy? These are questions asked by Gord Sellar’s short story, “The Clockworks of Hanyang”.

I highly recommend every one of the stories in this anthology. If I haven’t sold you on its merits yet, below is a list of each story with a brief summary. I hope you will pick up a copy and give it a read.

A woman questions whether or not to break free of society’s rigid rules when she meets a traveler exploring her city.

A man is forced to make automata for a ruthless tyrant, questioning his purpose.

A young inventor creates an automata, but it’s empty shell is the perfect home for an evil spirit.

In a steampunk version of the American Southwest, a spy must thwart attempts on his own life, which appear to be orchestrated by his superior.

A girl copes with being a lesbian in Southeast Asia before and after a war with America devastates her country.

A steam-powered world needs workers. One woman goes through raising children who are then sent to the factory, never to be seen again.

A couple of adventurers retrieve a strange machine part from an isolated cult in Iceland.

“Anna in the Moonlight” by Jonathan Wood

A soldier questions his role in a war between normal humans and humans augmented with animal limbs.

At a carnival, racism gets in the way of solving a murder.

“The Canary of Candletown” by C. S. E. Cooney

A girl unable to speak befriends an older woman in the coal mines, and they form a deep bond.

“Green-eyed Monsters in the Valley of the Sky, An Opera”

A crashed zeppelin leads one woman to a city in Brazil with both automata and dinosaurs.

“Selin That Has Grown in the Desert” by Alex Dally MacFarlane

A story about a young girl’s struggle with tradition and lesbianism in rural Mongolia.

“The Clockworks of Hangyang” by God Sellar

Automata start a rebellion in an eastern Asian city, and a veritable Sherlock Holmes and Dr. Watson need to escape the carnage.

“The Curse of Chimere” by Tony Pi

A professor explores what appears to be a curse upon a film trilogy as people start dying in the theater.

“Memories in Bronze, Feathers, and Blood” by Aliette de Bodard

A collective consciousness of automata birds discuss their creator’s life and legacy as a warrior.

“The Return of Chérie” by Nisi Shawl

In an independent African nation, a woman reunites with her former lover, a female secret agent on assignment to keep her country safe.

“On the Lot and In the Air” by Lisa L. Hannett

(I’ll be honest, I can’t for the life of me recall what this story was about, and I don’t have the book with me. Will have to look that up later.)

A diverse household in the American West fights to keep their farm as a railroad seeks to cut through their land and destroy their automata delivery business.

“I Stole the DC’s Eyeglass” by Sofia Samatar

A girl watches her brilliant sister build a way to escape the life of servitude they are forced to live.

A museum curator is called into the mines to investigate when a living woman is found inside a lump of coal.

The life of an automata is explored through brief moments within its life.

The wealthy elite are hosting a party. They get their comeuppance for their harsh treatment of their servants.

“The Governess and the Lobster” by Margaret Ronald

Through a series of letters, the life of a governess in a strange city is shown as she develops a relationship with her wild charges.

Airplanes are living creatures, and are being raised by the government for war at a seaside estate.

A boy whose father use to kill evil spirits befriends a fox spirit just as magic is dying in the world as the machines spread through the countryside.