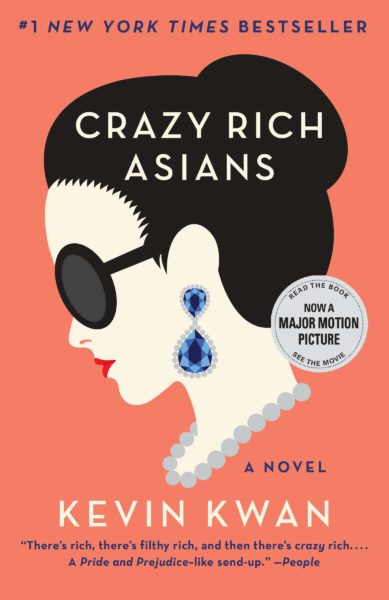 The short version is: I loved this series.

The story of Crazy Rich Asians centers around a Chinese American girl named Rachel who goes to Singapore to meet her long-time boyfriend Nick’s family. To her surprise, Nick’s family is one of the richest in Asia, and she is forced to deal with these rich (and frequently crazy), Asians. Among Rachel’s chief problems are the jealous women after Nick, and her boyfriend’s mother, Eleanor. All of them think Rachel, who was raised by a working single mother, is beneath him.

I rarely read literary fiction. I am a fan of genre fiction, usually sticking to fantasy/science fiction for my casual reading. Crazy Rich Asians is not something I would have normal picked up wandering around the airport terminal (I had a handful of books in my backpack already). But in some ways, Kwan’s series fits the bill. The world he depicts–that of the super-wealthy Asians–is utterly foreign to me, a middle-class white woman from rural New York. It is sometimes utterly surreal, and the fantastical elements (though true to reality) feel otherworldly.

In any other book, Kwan’s focus on describing every detail of people’s outfits and their environment might become taxing, but in this book, it works. In order to understand the luxurious lifestyle of his characters, it is necessary to mention every designer, every style choice, every price-tag. Without it, the opulence surrounding everyone–and Rachel’s fish-out-of-water story–would not have worked so well.

It is not often that literature includes a plethora of footnotes, but Kwan’s use of them is not only helpful, but adds another dimension to the story. He could easily have written entirely in English, but including the Singaporean and Chinese phrases kept the reader in this world, reminding them that this is Asia.

In western literature (and film) today, often Asians are still depicted in stereotypical terms. White readers tend to automatically assume the characters are white unless specifically told otherwise (I still do it, despite my best efforts to the contrary). This book series and the film version are changing that idea. It is a huge deal that the film is the first Hollywood-made movie in 25 years to have an Asian-led cast, set in the modern day. Since Kwan himself grew up in this world, we can feel the reality behind this bizarre society of the ultra-rich. Western audiences get to see Asia portrayed by a local, someone who does not view that world through the lens of European imperialism or its cultural stereotyping (though these things are addressed frequently). While it focuses on the elite, it brings home a perspective on family and values that are uniquely Chinese, no matter the income bracket. It is a learning experience wrapped up in a compelling contemporary drama.

Crazy Rich Asians and its sequels are everything I don’t read: literary fiction, romantic dramas, contemporary fiction, etc. But somehow Kwan mixed all of them together and made a book series that I would recommend everyone read. It introduces Western audiences to Asia in a dramatic, edge of your seat way that relies on intrigue more than action. It takes me out of my comfort zone, and I love it.