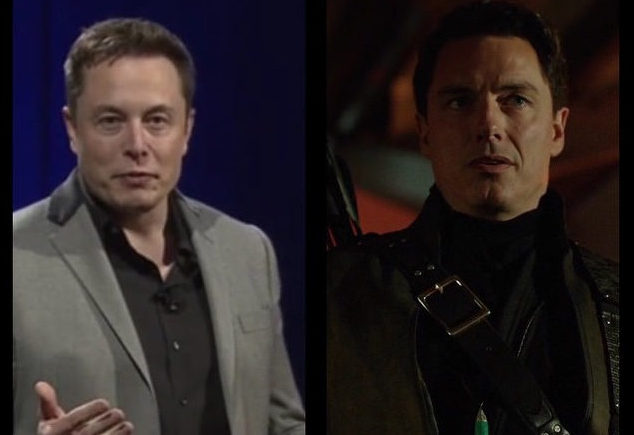 In 2015, Ashlee Vance published the New York Times bestselling biography of Elon Musk, a man who has almost single-handedly pushed humanity towards a greener and interplanetary future. To many, he is a superhero, accomplishing feats that lesser men could not even dream let alone make a reality. Vance articulates Musk’s history and his vision for the future in an enjoyable and approachable way. Yet perusing the pages, Musk’s backstory reads less like the origin story of a superhero and much more like the rise of a supervillain. (Someone else thinks he looks like a villain, too;  pictured above is a public domain image of Elon Musk beside Malcolm Merlyn from the CW’s Arrow, who is, in fact, a supervillain.)

As if the accent and weird name weren’t enough, he has plenty of other quirks that hint that we should be extraordinarily concerned if this man announces he is working on space lasers.

Every good villain needs a backstory that he can monologue as he prepares to enact his evil plans.

Musk’s childhood was unusual to say the least. His biography presents him as a private person. But we learn enough to show that growing up in South Africa wasn’t all roses. Sure, he was a privileged white son of an engineer during apartheid, so it could have been worse. But his father was difficult and distant, and Elon himself was a geek, back before that was hip. One story highlights this trait by detailing how he traveled to a Dungeons and Dragons tournament, risking his life on one of the most dangerous roads in South Africa. For his geekiness he was mercilessly bullied, once to the point of hospitalization. He was obsessed with science fiction, and as a result was not particularly well-liked. Vance’s book details him being beaten, and his best friend being beaten, just for associating with young Elon.

Sure, childhood trauma can go either way. Plenty of heroes have sad origin stories. So let’s move on to the next point.

One of the most impressive feats detailed in Musk’s biography is the three days it took him to go through six months of coding lessons.

Later, when he went to university, he was laser-focused on cutting edge technologies, such as the Internet and renewable energy. He became absolutely obsessed with the idea of ultracapacitors. That would be pretty useful for powering your Death Ray, wouldn’t it, Elon?

He is credited not only for being a founder of PayPal, but in developing technology still used in counter-terrorism and fraud detection. Sounds like something that would be handy for world-conquering, doesn’t it?

And we know that he isn’t afraid to work from scratch to build whatever he needs. His team built the successful SpaceX rockets on their own, building the vast majority of the parts in-house. That access to rockets thing is a bit concerning in its own right, but we’ll get to more of that later.

Elon Musk is known for taking no nonsense from anyone. It is well known that Musk can be a difficult employer, illustrated by the firing of hundreds of workers simultaneously from Tesla.

In Vance’s biography, he equates Musk to a general (coincidence?). He takes no excuses, refuses to deal with traditional sales practices, ad at one point even told an employee that the birth of a child was not a good enough excuse to miss an important company event. Can you say tyrant?

More than once he has butted heads with traditional regulatory agencies, including the FAA and NASA. When he wants something done, he will make sure it gets done.

Musk did not technically found Tesla, despite common “knowledge” otherwise. He was the lead investor initially, and through coercion and sly maneuvering, got both Tesla founders, Martin Eberhard and Marc Tarpenning, to leave the company. Eberhard at one point even sued Elon Musk, though the lawsuit was dropped. With the original founder’s gone, Musk had enormous power over decision making. SpaceX engineer Kevin Watson said it best: “He will outmaneuver you, outthink you, and out-execute you.”

Now we are getting into the more villainesque qualities. You don’t see many heroes that conniving.

One thing that supervillains value more than anything is loyalty. They can’t have minions giving away plans for a world-ending weapon, or blabbing to the hero before they get to monologue (Musk would be great at the villain monologue).

Vance makes clear that Musk has a habit of making bold promises on deadlines that cannot possible be reached. Nonetheless, he inspires his employees to work insane hours in order to get as close to those deadlines as humanly possible. There are records of engineers working over 100 hours a week to meet his deadlines. Only the most committed would last long in Musk’s world. Those that would not give up weekends were threatened, bullied, or simply let go. And even those that were fired often point out Musk’s admirable, superhuman qualities.

Loyal employees did get the benefit of Musk’s favor, however. An anecdote from Musk’s biography explains when he paid for engineer Jeremy Hollman to get Lasik surgery so glasses would not be a problem during the early SpaceX years. Hollman later left after being blamed for a malfunction during SpaceX’s first launch. This was later found to be a result of salt in the air at their launch site. The site itself was said to be, “part tropical paradise and part Dr. Evil’s secret lair.”

I don’t know about you, but this comparison is starting to seem extremely apt for a Musk project.

From the time he was a teenager, Musk would cold call people he “thought were interesting,” including big names in business and finance. He got an internship at the Met Bank of Nova Scotia this way.

Later, he was quoted as saying, “Bankers are rich and dumb,” a quote that could easily come from a supervillain that somehow got funding for his death ray.

For a supervillain, funding can be a big issue. Musk has the useful talent of being able to acquire funds even when he is extraordinarily in debt. When both SpaceX and Tesla were on the verge of simultaneous bankruptcy, Musk was able to garner enough support through inspiring speeches and grand schemes to fund his ventures just long enough to get them off the ground (in the case of his SpaceX projects, quite literally).

One of the most fascinating stories from Musk’s early forays into space exploration was his trip to Russia where he very nearly bought an Intercontinental Ballistic Missile. He deemed it too expensive, leading to the development of SpaceX’s own series of rockets.

The fact that he was actually talking about buying a ICBM is enough to raise my eyebrows.

Doing Whatever It Takes? Check.

Musk has enough influence and power that he can skirt rules and regulations quite neatly now. Especially when his companies were struggling, he was willing to break rules to get the job done. Vance tells a story of how once Musk had his employees at SpaceX stealthily install their own fiber optic cables (sans permits) in order to cope with the large files needed for his engineers. Stealth was key, as SpaceX headquarters happens to be located in a heavily populated Los Angeles suburbs, and the authorities probably wouldn’t have approved of their activities.

When SpaceX was in the make-or-break phase, Musk personally flew on a weekend roundtrip from the remote Pacific island they were using to launch, all the way to the United States in order to pick up rocket parts because it was a Sunday and nothing was open.

And never let Elon Musk hear you say that a process is “the standard way of doing things.” He demands the best, most efficient way of doing anything, and will completely redo a process (or get his employees to do so) if it fails to live up to his expectations. He wholeheartedly believes he can change the world. And he is doing so, no matter what anyone else thinks.

Between SpaceX, Tesla, SolarCity, Neuralink, and The Boring Company, there is little doubt that Elon has some fascinating (and potentially evil) interests. Let’s analyze each of these for villainous capability, shall we?

That’s not enough? Okay, well, baring the obvious, consider what gets sent into space. On 7 January 2018, SpaceX was charged with sending a secret government satellite into orbit. The mission failed, though SpaceX appears to not be at fault. But could it be Mr. Musk stopping the government from spying on his top-secret offshore lair, á la Karl Stromburg? Perhaps. The world may never know.

Owning a Tesla is a symbol of power and opulence. Tony Stark had one in his workshop in the original Iron Man, the year the first Roadster was first released. (Incidentally, this came around because Robert Downey Jr. went to visit Elon Musk when doing research for the film. For research purposes.)

Despite Musk’s attempts to make them more affordable, few average Americans are signing up for one. Yet the Tesla has one potentially chilling feature; starting with the Model S, Tesla is able to conduct updates to programming through an internet connection. At night. While the owner is asleep and oblivious. This seems cool at face value, but these are self-driving cars, and Tesla has already had one fatal accident on the books (though the technology was reportedly not to blame). Think of the potential if a malicious force was doing the programming. It wouldn’t be a new phenomenon for someone to hack into high-tech cars.

This one should be self-explanatory. Neuralink is looking to connect the human brain to computers. Sure, it has the potential for great things as they look into treating brain diseases, but hacking people’s brains could be catastrophic. Science fiction clearly highlights these perils.

Mostly this just highlights what I said earlier about ultracapacitors. It’s a way to power Musk’s death ray. Moving on.

While flamethrowers bearing the company logo might just bring up fond memories of Spaceballs, its other activities have some nefarious potential beyond people setting their houses on fire. (It was nice of them to offer a fire extinguisher add-on.) The Loop might just be a means to an end. Learn how to dig efficient tunnels and then use that technology to build an underground lair to hide your death ray. I am on to you, Mr. Musk.

Upon reading Vance’s biography, it becomes clear that Elon Musk has all the makings of a truly spectacular villain. He is much more of a Lex Luthor than a Superman, or even a Batman. The argument could be made for Iron Man, but I have some thoughts on the nebulous nature of Iron Man’s “superhero” status.

Deified by the media and many of his loyal supporters, Musk bears traits of many classic villains. To the best of my knowledge, he doesn’t sit in an office stroking a cat, but his unwavering focus, unquestionable genius, and potential for ruthlessness make a strong argument towards evil mastermind. Maybe that’s why he’s so keen on Mars. Ignoring the implausibility of Moonraker, a villainous lair in space would be a genius move. It’s much easier to see threats coming when they take roughly a year to reach you.

NOTE: This is an article for entertainment purposes only, and is solely my personal opinion. Please don’t sue me, Mr. Musk. I have great respect for you and your work. (But I would love to write a comic book with you as the supervillain, if you were up for it. Just throwing that out there.)